My wife’s family live between Le Man’s & Tours in West France, so we drive there a couple of times a year. This journey was the one thing that was putting me off getting an EV. The charging structure in Sartre is really bad. My impression of charging generally in France was not positive. There are plenty if type 2, lots of type 3c, but not so many CCS ( or CHAdeMO for that matter).

I has searched all the charging apps for CCS on the route I take from Munich for many many hours and came to the conclusion that it would be difficult to make the trip. Between Auxerre and Tours a distance of about 300km there was no rapid chargers that are operational. There was an option via Paris which I hate, but again the last 300km has only 1 rapid charger, and if that is broken there is no fallback.

The other, preferred, optional route has a charger at a LIDL that according to Chargemap has been out of order since last November. I sent a series of emails to LIDL France and the emphatically stayed the charger us operational. Using this route I could probably reach my in-laws without a great problem. Once we get there we would have to use the granny charger at it’s low power setting. My in-laws only have a 6.6kW supply into the property!

We have for many years now split the drive over 2 days. First to Beaune, and then the rest, so this time was not going to be different. I booked a room at the Mercure Beaune Centre hotel partially because of its location and partially because it has chargers. Most of the chargers were Tesla Superchargers, but they had one charger with Type 2, Type 3c and 2 pin 240V sockets.  On arrival, and plugging into the type 2 we discovered the charger wasn’t compatible with the the Ioniq for some reason. We kept getting “Charger Error” displayed in the Ioniq, and the charger never started charging. We reported this to the hotel, but they couldn’t do anything as the maintenance people had left for the day. So we had to charge with the granny charger. The hotel did say they would get the maintenance guys to look into it on Monday.

The following day we drove via Chateau Chinon-Ville, and as expected the Lidl charger was out of action. It was powered off, and covered in cobwebs. So much for the assurance from Lidl  that the point was functional. My plan B was to charge at Magny Cours, and that was a faster charger and fully functional.

The rest of the trip to the in-laws was uneventful really, except we discovered a new rapid charger at Neuillé-Pont-Pierre on the A28 (at the exit after the toll booth, which is about 35Km from our final destination. This was excellent as it meant we didn’t have to load down my in-laws house with our granny charger. My in-laws house is only provided with a 6kW electricity supply as it is in the middle of nowhere and they have only a few fridges and thats about it.  During our stay we topped up a few times at the local supermarket on a type 2, and on a day trip we failed to charge at a type 2 at Montreuil-Bellay. The charger had 2 type 2 sockets. one was in use by a Tesla and they were charging, but the second socket gave us the same error as at the hotel. It did finally say it was charging, but it terminated about 2 minutes after we left, resulting in a bill for 45 minutes charging for 0.01kW.  I successfully challenged the bill later. 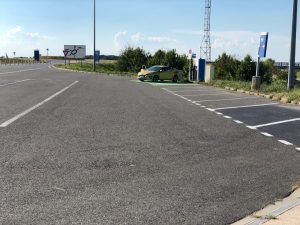 The return trip we did a bit differently. We headed along the A10 towards Orleans, charging at Villerbon which is finally in operation, and then cross country to Charny. In the car park of the supermarket we found a type 2 socket which we plugged into whilst we had a very nice lunch at a local restaurant. Much to my surprise the Maingau/ESL card worked here. We increased out charge by 35%.

After lunch we continued to the Autoroute A8 at Sépeaux where there is a rapid charger. Unfortunately this charger is not yet in operation, o we had to continue across country to Aillant-sur-Tholon which is a really small town that has a rapid charger next to the church. On arrival there was a Zoe which was just finishing its charge, so a short wait of 5 minutes was on the cards. This was the first time we had to wait for a charger during this trip, but half an hour later we were fully charged and on our way again via the A8 to Beaune and back to the Mercure Beaune Centre hotel.  At the hotel, the type 2 charger still wasn’t operational, and again the technician wasn’t available. The hotel received a written feedback on this when I received their satisfaction survey. Anyway, we charged again overnight on the “granny charger” and continued the next day in the direction Mulhouse and Germany.

In Germany I also wanted to try a different route. For some reason in the south west of Germany chargers are few and far between except on the Autobahn. Just before Freiburg we charged on the motorway to 94% and then headed to Tuttlingen. According to the apps there was a rapid charger at the VW dealership which may or my not be operational, depending which app you look at. otherwise, there are a few type 2 around. On arrival at the VW dealer, the road was dug up and it was not possible to access the dealership. At least so it appeared. I parked close by and took a walk around, eventually asking someone on a bike in the forecourt. The dealership had an access via a back road, so we were able to reach the charger and get fully charged again.  I had planned a stop at Memmingen but the rapid charger there is broken, and has been for a couple of months. The CCS doesn’t recognise any vehicles. As our charge level was getting a bit low, i need a charge so our next stop was at Autohaus Sangl, where we originally purchased our Ioniq. There there is a free 20Kw CCS. On arrival the park bay was blocked by an i3 that had stretched its charge cable over to a type 2 charger in the next (and empty) parking bay. My only options were to park on the pavement or block the entrance to the parking.  I chose the former and no sooner had I plugged in that I was verbally assaulted by an older couple for blocking the pavement and received threats that they would call the police and get me towed away. Whilst they were technically in the right, the way they spoke to me telling me “in Germany we obey the law, which obviously isn’t the case where you come from” was out of order. After I calmly explained to them why I was there, and explained that I was unable to drive further unless I charged as this was the equivalent of a petrol station for me, they calmed down and we had a chat about range and charging duration. They went on their way and I finished my charge.

We arrived home an hour or so later, tired but happy.