Italy has been outside my comfort zone when it comes to using my Ioniq Electric. To understand why we need to go back a couple of years to the time when we were first considering the possibility of going electric.

We had driven in our hybrid to Milan, an attractive city, at least in the center, and we were looking to see where the charging points were. We didn’t see many, in fact as I remember we saw 1 rapid charger and a couple of slower chargers, possibly type 3c. On the drive back to Munich, we decided that we would simulate an EV with a range of 200 Km and stop at recharging points on route. We didn’t find any rapid chargers but 1 slow charger. I  think we had the New Motion charge app with us at the time but I am not 100% sure. In any case we came to the conclusion that Italy was “difficult” for charging.

So back to the recent past and we now had our Ioniq Electric and we decided to make a tentative exploration into Italy. I had read in the GoingElectric forum of other users and trips to Italy, and one of them showed pictures of a rapid charger at the Brenner Pass. So, we decided to go there, and if possible a bit further. It was winter and therefore our range was limited. On reaching the top of the pass we drove into Brenner town, and looked without success for the charger. We saw a local police car, so we asked them where the EV charging was, and they said there wasn’t any but maybe in Vipitino which is about 30 Km down hill. We were at about 20% charge, so I was a bit worried about going further, but we rolled down hill without using any power, in fact we gained a bit. We found the charger, which was a 11 Kw Type 2 and  for an hour whilst walking around, but I was still worried. on that charger we didn’t get much of a recharge and most of what we gained we used returning back up to Brenner.

Just outside Brenner I stopped and pulled up Apple maps, put it into satellite view and manually searched for possible charging locations. It was then I spotted the Tesla superchargers outside of Brenner on the other side of the autostrada. tracing the road back I found there was a tunnel to the other side, and we only a few meters away from it. So we got our charge, and it was free.

Now to the present. Since the first test of Italy we had been to Vipitino a few times and once from Lago di Resia to Merano and back over the Brenner without incident. So it was time to step out the comfort zone a bit more.  I decided on the following strategy. I would drive to Brenner, and fully charge, then drive to the next charger that I found listed at Bolzen, or if the charge was ok Pagenella. From there to the next charger and so on in the direction of Verona, never letting the battery fall below circa 55%. If there was any issue with charging I would turn around and go back.

The route went first to Hall in Tirol, to a free Lidl, where I would give a quick charge, 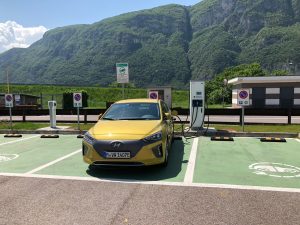 just enough to get up the Brenner. There I charged to 94% and started downhill “into the unknown”. Downhill I needed very little power, and it made no sense to get out at Bozen, so I continued to Pagenella, and on arrival had only used 40% of the battery.
The charger was free and worked perfectly. Here I have to say, not once was any charge point blocked by another car, and all chargers worked perfectly. Very impressive. The next stop was planned to be Affi, but I actually had enough power to get to the charger at Verona. Realistically I could have gone all the way from Brenner to Verona 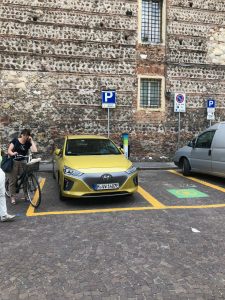 on the one charge if I had kept to circa 110 Km/h, but I did go to the autostrada limit of 130 Km/h which of course takes its tribute.

The charge point in Verona was also free, as was the parking, but had to be started with an app. I had already downloaded and installed the app, so after finding the correct QR code, the charge was easy. I stayed there about 2 hours, and then started the return trip.

The return trip was, needless to say, without incident. 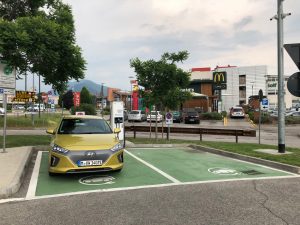 Almost. First a quick toilet break and 10 minute top up at Affi, and then onto Pagenella. This is the only incident I experienced. It poured down with rain and there was a very close lightning strike. Luckily it only lasted about 15 minutes and during this time the temperature dropped from 27C to 15C. At Pagenella, the charger was a bit out of the way but well signposted. 20 minute or so charge up to 94% again, then up to Brenner arriving with 19% (27 Km) left. All uphill of course so 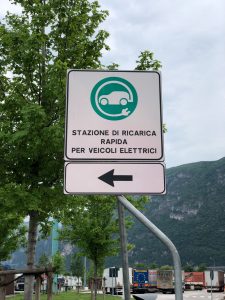 high consumption. My longest charge was here. 40 minutes to reach 94% When I was almost finished a Tesla X P90 driver arrived and was very interested in the Ioniq. Surprising to me was that when I told him I get a range of up to 240 Km, he said he doesn’t get much more with his Tesla. The final part of my trip was over Garmisch to Munich, which was completed in one go arriving home with 31% (74 km) battery left.

The totals were 869 Km covered in 10:45 hours of driving (plus charge breaks), average speed 86Km/h and a consumption of 13.2 kWh/100 Km.  Overall I think a good day and certainly a successful trip.