Unusually I had 3 days off in a row from work, so we decided to take a mini break. We wanted somewhere not too far away, and place we had never been to before. Chemnitz was decided upon. The trip was very uneventful in both directions. We drove we charged once we drove on. 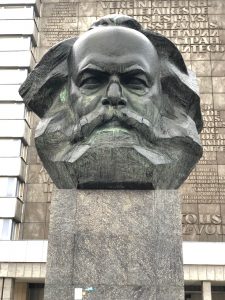 Thats about all there is to say about the trip there and back.

And how about Chemnitz? Well I can sum it up in 4 words. Been there, done that.  It’s not that Chemnitz is uninteresting, its more, how can I say, uninspiring. The major tourist attraction is and oversized bust of Karl Marx, apart from that there is, frankly, not much.

Ok, so how about charging infrastructure? Well, there is 1 rapid charger a few Km outside the city on the Autobahn going from Dresden to Chemnitz, none in the other direction. There is a type 2 charger in the Galleria car park, which can be started with a local RFID card or SMS, but the parking costs a couple of Euro per hour. We did find a type 2 charger on the street about 10 mins walk from the hotel outside the IHK building. This can be started by SMS and you can stay connected for upto 4 hours. We were of course charged for the SMS at standard rates, but I never saw a charge for the charging. e charged to 100% and then re-parked to the hotels car park.The hotel said they could not provide charging “for liability reasons” What? 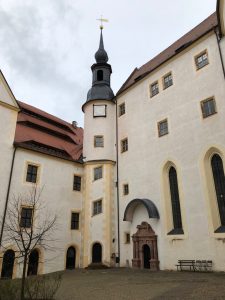 The next day we drove to Coldiz Castle, famous to Brits as a WWII POW prison and the  subject of films, books and even board games. I visited the castle back in 1990 not long after the fall of the DDR. Since then there have been a lot of changes at the castle, and the town of Colditz. The town is quite nice, but the tourist office looked at us like we were from Mars when we asked if there were any charging points for Electric vehicles in town. Needless to say, there are none. Chantal had never been in the area so the tour of the castle was new to her and I think she enjoyed it. We were there just after some massive storms which caused quite a lot of damaged to the Castle, and they were already doing repair works. The car park was partially dug up as well. It turned out that our guide was half British so we had quite a long chat to him after the tour. We mentioned we were in an EV and that it would be good if they could get a charger installed as Colditz was a black spot, and a charger would attract EV tourists. I was pleased to hear him say it was already planned.

Currently the area around Chemnitz is a very black hole for EV tours.