Following on from our failed search for a cat, we had made contact with someone in Brno (CZ), who had some ragdoll kittens for sale. She offered to come to Munich so we could see them,but we said we would goto her. It would be less stress for the kittens if we didnt want them and we could see the mother and father as well. The only problem is the Czech EV charging network. The only access to it is with a contract at €15 a month. They are not connected to any roaming network, nor is there a pay as you go possibility. I took the step of writing to the network owners telling them how tourist unfriendly there network is, and I actually got a reply which in a nutshell said. “so what!”.

This mean of course the best route over Prague was a nonstarter for us. The best alternative was to drive to Vienna,and then go straight north via the shortest route possible, and back the same way. Each way would be close to 600Km. As this probably wasn’t going to be possible to go there and back in a day, I looked for a hotel in Brno with a charger. I found one that had a Tesla destination charger. I emailed them and they confirmed they had 2 points. This meant that one was free for non-tesla usage as well. A trip of 600Km was going to be our longest trip to date. I already had a Smatrics app and account so I foresaw no major issues with charging.

Going to Brno we charged 9 times. The motorway was taking its toll and it was very cold.  Our last charge in Austria was at Hochleiten and it was with a very uneasy feeling that I entered the Czech republic. The destination in Brno was about 90Km away, so if the hotel charger didn’t work, I would have enough charge to get about half the way back to the charger.

Arriving at the border to the Czech republic, I had to buy a toll sticker, and whilst chatting to guy at the kiosk, he told me there was a charger at Lidl in Brno. For some reason I hadn’t seen this listed in any of my charge point apps. A quick google search and I had the address of Lidl in my navi and we headed there first. On arrival I was surprised to see the point blocked my a Nissan EV-200 which was charging. I plugged into the Type 2, as I had no idea if or when the owner of the EV-200 would return, and as I turned around he returned. We had a quick chat and he explained to me that the point was relatively new, and Lidl was rolling out more chargers around the country. As he left, I moved over to the CCS and got a full charge and did some shopping. It turned out Lidl had an English week with all sorts of English food goodies (all made in Holland!). Arriving at the hotel, I pugged into the destination charger to top upto 100% 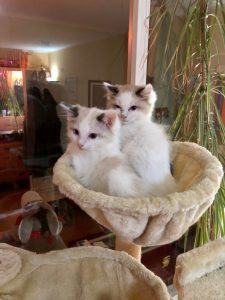 We bought two Ragdolls from the breeder and set off for home on Sunday. Brno looks like an nice place to visit sometime, when its warm. As we had the two kittens in the car, we didn’t look around. On the way home we took a different route and only recharged 5 times. It was still bitterly cold. One thing that irritates me a bit is that some chargers close on Sundays, and after shopping hours. Now I understand Lidl & Co put in the chargers to attract customers, and that is super, but I think it might be a two edged sword as the local councils my have less incentive to install rapid chargers. This in turn means outside of store hours transit traffic can have problems getting a charge. Please Lidl & Co leave the chargers on 24/7, even if that means we have to use a roaming card like Plugsurfing or The NewMotion to pay for the chargers. Free is good, open 24/7 is better.

I found charging in Austria to be expensive. The distance covered was 1193Km and the total electricity cost was €108,76 which works out at almost 11 cent per Km. The killer in these cost were the adhoc charging rate and the €1 start charge. The charge locations and costs are below.