Welcome to my blog about my experiences owning an Electric Vehicle, specifically a Hyundai Ionic Electric. In this blog I aim to cover our journeys,  advantages and disadvantages of owning an EV and any problems we encounter.

About me: My name is Victor, I am by birth a UK citizen, but have also German nationality by choice. My professional background is varied having held a range of positions from quality assurance, flight simulation, computers system management, satellite control to retail sales. I am now close enough to retirement that my professional future is no longer important compared to other things in life.

One of my main interests is travel. Time doesn’t allow as much travel as I would like, unfortunately, but in the past I have travelled extensively. I also love technology and have often been an early(ish) adopter of new technology. I had my first hybrid car before they were cool, at a time when peoples first question was “Whats a hybrid?”. 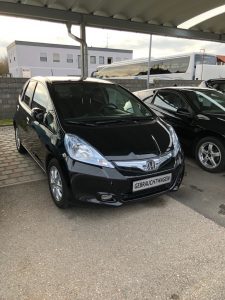 I was for a long time someone who laughed at the idea of an EV. I live in Munich, in an apartment, and the garage I had was without power, with no option of getting any power installed. My position on EV was, “I drive it from the dealer to home, and then what? I cant charge it, so its useless.” At that time public chargers were rare. One of my colleagues had a Twizzy, and then a  Smart EV and I use to pull his leg about where he put the AA batteries so he could use it. I should say I find the Smart (in any form) a comical car anyway. However I was also interested in his experiences and often talked to him about his experiences.

In time I signed up for DriveNow, so that I could have access to a car if I had issues with mine. I didn’t use DriveNow for about 2 years, but for some, now forgotten, reason I had 60 minutes usage available on my account, so with my wife we took out a BMW i3 for a spin. I was hooked. The experience was a real eye opener. We talked about buying an i3, and even opened an account at the BMW Bank with the thought of saving up for one. I must say however, the BMW configuration utility is such a horrible thing that I never was able to figure out exactly how much an i3 would finally cost.

I had been reading all sorts of websites, looked at loads of youtube videos and consumed just about all the info I could on EV, but was concerned about range and price. I went to look at a Nissan Leaf. The dealer asked where I would charge it and stated there was only one charger in Munich. I was a bit shocked at this statement. He didn’t offer us a test drive, so we left the dealer. We looked at a few other EV’s such as a Renault Zoe, where the dealer was with another customer and the receptionist said come back another time as she had no clue, and a Mitsubishi i-MiEV from outside (the dealer was closed).  We put the idea of an EV on the back burner as a no go option and bought another hybrid.

Spring 2016. I watched the presentation of the Hyundai Ioniq range and for the first time I saw an EV that I thought was practical. A range of 280KM and a nice looking car with lots of bells and whistles.  There were just 2 issues. Out Hybrid was only a year old, and the Ioniq Electric wasn’t due to be released until summer, or autumn …. no one really knew. Seeing the presentation I knew this was a very big contender. I had by this time decided I didn’t want another pure hybrid, but maybe a plugin hybrid or an EV. My argument for a plug in is that a couple of times a year I must drive to west France, about 1200km away, and from my research on the leaf, I though with an EV this trip would be difficult to impossible. That summer the Ioniq was stuck on my mind, and it would be for almost 18 months. Each trip we took, where ever it was, I was looking for and checking out EV charging stations. My conclusion was there were more than enough to cover all our normal tips, but France could be tricky. Over the next 18 months I drove to France 3 or 4 times, as well as to Milan. One a couple of occasions we “simulated” a trip with an EV with a 200Km range, and said, we would route via chargers, and check them out. Italy appears to (still) be a nightmare. We saw 1 CCS in Milan, but after that none at all going back over the Brenner pass. I have since found one at Brenner and a few others around Merano and Vipitino, but I still find Italy a worrying place to drive to, but more on that in another post. France is different. Well, the French have their own ways, and I found a fair few Type 3c chargers which are not only slow, but really incompatible with modern EV’s. Do any new EV still support 3c? There is a reasonably good rollout of CCS triple chargers on the autoroutes and a large number of slow chargers (type 3c and some type 2) at supermarkets. But, and it is a big but, the rollout of chargers appears to stop to the west of a line drawn south from Paris. Of course, this is exactly where I need to go. Basically from Auxerre  too Tours, there are no CCS chargers, just a couple of Chademo.  On the A10, a charger was installed 2 years ago, but it has never been activated. 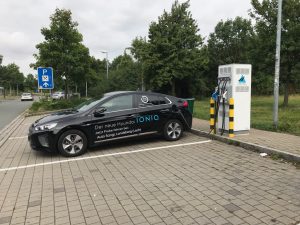 But I digress. Following a lot of talking with my wife, we decided that the long trips we make doesn’t warrant carrying around a motor that we will hardly need, not to mention the extra servicing costs due to the more complex systems installed in the car. So a plugin hybrid was also ruled out and we were back to a pure EV. By spring 2017 I had heard that Autohaus Sangl in Landsberg am Lech had an Ioniq Electric on the forecourt so we took a drive out to take a look. We were looking at it when Jürgen Sangl came upto us and we said we were looking at the Ioniq. The next thing I knew I was in one taking a test drive. I was totally unprepared so we just did a 15 min or so drive to get a feel for it. I was impressed. We had also short listed 2 other EV, the Kia Soul and the Renault Zoe. We never got to test drive the Soul. I contacted Kia, they would get a dealer to call me, but the call never came. 3 times Kia called, 3 times I told them no dealer had contacted me. Renault was a bit better. Again via the Renault website I booked and got a confirmation for a 48 hour test drive. At the appointed date I turned up at the dealer and they had no car. They said they had no information about a test drive, but if I went back in the afternoon they would have one for me for 24 hours.  I don’t know which specification the test drive EV had but I just didn’t like it. It drove well enough, but after an hours drive, we had to plug it in for an hour to recharge. I can only assume it had the 20Kwh battery and slow charger. We drove to Augsburg and back, and on Sunday we struggled to get to friends in Selb, and gave up after 4 hours. It was painful. I also didn’t like the Navi or the eco mode limit of circa  90Kmh which I found dangerously slow on the autobahn. On giving the car back I told the dealer my concerns, thanked him and left. I also mentioned to him that having no RFID card in the car could an issue for a test drive. Lucky for me I had already obtained my own one.

The Ioniq was still on my mind. It was now August and beautifully hot. 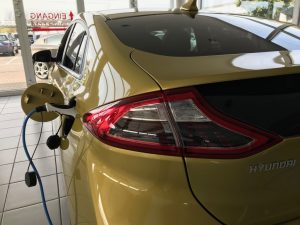 I had previously arranged the Autohaus Sangl a 4 day test drive, I had booked holiday from work and we were collecting the car. We decided that we would try to get to Selb again. Driving the Ioniq was such a pleasure, and so easy that we changed our plans and drove to Dresden, and into the Sächsische Schweiz. We did have one bit of range anxiety when I took the wrong autobahn junction and ended up heading towards Chemnitz, on low power and unable to find a CCS charger. We stopped in a village that had a slow charger, had a pizza and after an hour or so had enough charge to get to Dresden and our hotel. The hotel had EV charging, well it had a red or blue socket and an adaptor at reception to a standard power socket, so overnight we were able to charge with the charging brick (Granny charger). The following day we explored the region and encountered the other problem with an EV. No motor noise means less feedback about speed which is not good for speed camera avoidance! Our return trip to Munich via Selb (at last) where we visited our friends and took them for a quick spin in the Ioniq as well

Returning the car to Sangl, we had a good chat about the purchase options and delivery was stated as December. 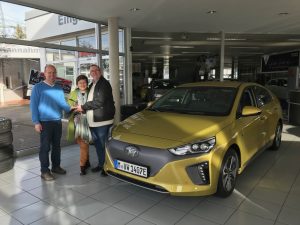 We didn’t place an order but on the way home In our Hybrid, which now sounded so loud and felt ancient, I asked my wife if she agreed to getting one. She said yes. We waited until end of September before we returned to Sangl and placed an order.  We wanted a sun roof, but that would make a years waiting time. I was a bit taken aback as I had expected December/January. Other options were talked about and we decided a sun roof wasn’t so important, and Jürgen told use there was one available in the colour we wanted in May. We made the order and arranged a trade in value for our hybrid. and settled in for a long wait.  At the end of October, I had an email out of the blue from Jürgen that there was a car available for December, did we want it….Silly question! We collected our car on the 27th November, even earlier than the email had suggested.