eRuda, or elektrisch Rund um den Ammersee, is the biggest meeting of EV drivers in Germany, and this year there was something like 270 EV registered to take part over the 3 day event. I had been looking forward to this since the spring. The meeting place was in Weilheim on the Friday 5th October. On arrival, we were not greeted or directed to park in any specific place, which surprised me as we had registered as part of a team. The first event we were due to take part in had already left a few minutes before we arrived, and so we were told just to make our own way to the destination. On arrival,  we waited a long time, looking for other people taking part before eventually we found them. The presentation about the village of Wildpoldsried was interesting however. In the evening there was a briefing for the next days “challenge”, followed by a presentation by Otto Schönbach who drove in a Twizzy from Munich to Nordkap. What a crazy trip!

Saturday we arrived early so we could be in the group leaving by 8:30. We had expected a start photo and to be registered as setting off. There were a couple of people standing around, and on enquiry we were told just to set off. The “challenge” was to get to the top of the glassier road, Rettenbachferner, the highest road in the EU. I didn’t find it that much of a challenge. I had expected the pass to be steeper. We saw a few other EV who were attempting it without recharging, by driving very slow, and thus causing a lot of tailbacks.  I don’t think slow driving EVs really promote their adoption. Anyway, we arrived at the top of the mountain with something like 50% charge after having a recharge some 10Km before the start  of the Ötztal. On arriving at the checkin point we were given the sticker, and that was that. We then had to head back to Landsberg am Lech. The instructions on the briefing said to goto one specific address, but it was incorrect. We actually had to goto the town centre. Once we arrived there, they asked why we were not on the leavers list, the list we were looking for when we left in the morning. However they stamped the back of our sticker with the arrival stamp and we parked up. Up to this point we had only seen 2 other members of our team.

I felt the whole eRuda was chaotic and not well organised. So we didn’t bother going to the Sunday events. I can not see myself taking part again. 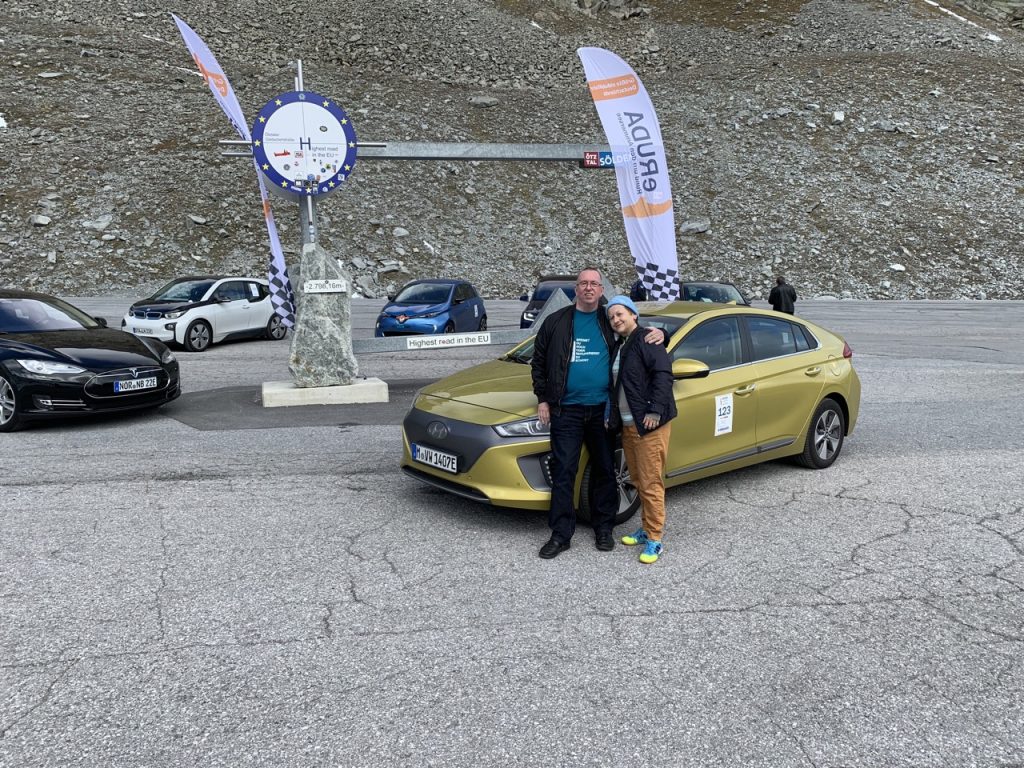