It sort of a tradition that we take all our cars up to the top of the Stelvio pass during the first summer that we have them. For the Ioniq, this was delayed a few times, but at last it was now time to do the trip.

We left Munich at about 8am with 80% or so charge and headed down the A95 towards Garmisch. I had it in mind there was a rapid charger at and A.T.U. between Garmisch and Lermos so when we arrived at the A.T.U. and found no charger I was confused and a bit worried, as I now only had about 20Km range. Our only option was to return to Garmisch and plug into a 22kW type 2 from New Motion. I am certain it is not a 22Kw connection, as the car told me it would take 8 hours to charge. This would suggest the charger was only providing about 4kW I think. After an hour we had an increase of 18Km. We decided to continue to Lermos where we charged for another 30 minutes and had an increase of 25Km. This gave us enough range to get to the Ella rapid charger at Karrösten. it was now 12:30. I had imagined we would have been at Stelvio by this time.

After the rapid charge was completed, it was time to goto Malles Venosta in Italy where I planned to have a rapid charge before the accent of the Stelvio. As with the rest of the trip up-to now, this didn’t go to plan. The charger is on a public square in the centre of the old town. As luck would have it, the square was closed due to a village festival. The only other charges are both slow type 2 belonging to hotels and one of those is out of action since July so I decided with 110Km range, that we had enough range to get to Bormio where we would charge over lunch before returning over the other side of the Stelvio. From Malles Venosta to the top of Stelvio is about 20Km, and then from there to Bormio about 30Km. So it shouldn’t be a problem

The drive up the Stelvio is not recommended for new drivers or people who are not confident. Its narrow with a lot of kamikaze motorcyclists going way to fast around blind bends and cutting the corners of the hairpin bends. Going up the mountain I had several occasions where I had to stop because of this and because of other cars coming down the hill that refused to give way on narrow stages. I was always taught that those coming uphill have priority unless otherwise signed, this doesn’t appear to be the case in Italy.

From our initial 110Km at the foot of the pass, by the time we were half way up, we were down to 40Km. by the last 5 turns I was at two bars on the battery meter, and I had doubts we would make the top. On reaching the top we had 8Km range left and of course there are no chargers or even 240V power points anywhere to be seen. We parked up and went for a pizza, and asked the owner if there was anywhere to plug in. As expected the answer was no. I didn’t really enjoy the pizza for some reason. The top of Stelvio is a mess of parked bikes and tourist trap stores. We didn’t look at any. I usually enjoy the view from the top, and usually spend a bit of time looking at the stores, but today I was very worried about how we would get the 40Km+ to the next charger. 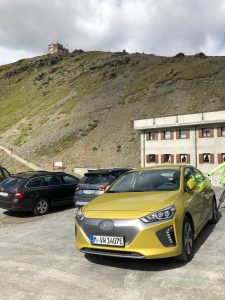 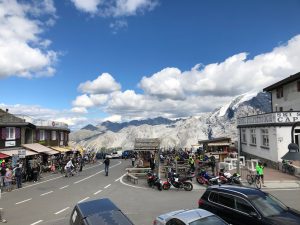 On restarting the car and leaving the parking place we had 7Km range. using a combination of regeneration step 1 & 2 we dropped the 16Km long 2000 meter drop, 48 hairpin bed road and recovered to 62Km in range. in addition we used no power at all actually going down the road, effectively we had 71Km of fuel free travel. We headed to the closest rapid charger at Lasa. There were conflicting reports about the status of this rapid charger. One said it had been removed and was being upgraded, another said it was getting the price info and that it was all ok and operational. The former proved to be correct. The charge point has gone. So we continued onto Silandro and charged there instead. The RFID cards proved to be an issue. Maingau/ESL was refused, as was Ella, SWM, Hyundai/enbw, Smatrics, and Chargemap. It finally worked with Plug Surfing. The next stop was Brenner. No issues there. For the Tesla owners, the supercharger has been expanded to 16 bays, and the CCS charger has been moved along 2 bays. There are 2 empty concrete bases, so it looks as if extra CCS may soon be installed. The type 2 charger has also been moved over and replaced with another type I think.The rest of the trip from Brenner to Munich went without any real issue, except an SUV/Tank trying to run me off the road at the Brenner bridge video toll gate. We arrived back in Munich at around 11:00pm with 90Km range left. The total distance was some 650Km. I didn’t record the kWh/100Km.