On a rather grey Thursday with  about 19c I decided to go for a drive. I didn’t really know where to go, but I just wanted to get out for a few hours. A quick look at the map and a pin in a random town not too far away, that I hadn’t been to before. A second quick check on the ChargEV app to see what Charging was available and then off.

Neuburg an der Donau was the target. It’s about an hours drive away but in the 29 years i have lived in Munich, 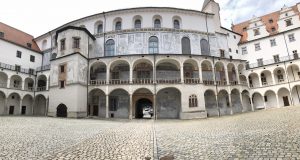 I have never been there. The route took me first on the Autobahn direction Ingolstadt and I thought I might make a quick top up at the Tank&Rast but I decided I had enough charge  to get there and back home again. As I drove by the Tank&Rast I saw that there were a large quantity of police and it looked like there was something going on, so it was probably a food idea not to stop.

I turned of the Autobahn shortly after and drove across country via Schrobenhausen and it’s asparagus fields eventually crossing the Donau and parking at a small car park 10 minutes away from the old town. The parking was free as was the type 2 charger. The charger needs to be activated by an RFID card, I used the Maingau card.

The old town of Neuburg an der Donau was very quite. It is full of historic buildings, a couple of cafes and very few stores. In this area is also the tourist information office and the theatre. There is also the old castle which now has a museum in it.  The new or lower town was not so interesting but it is where you feel M.D. most of the stores and restaurants.

I must have spent a couple of hours there in total. The sun had come out and it was about 21C. Returning to the Ioniq I had about 81% charge. For the trip back I went first in the direction of Augsburg and cross country until I reached Odelzhausen where I rejoined the Autobahn back to Munich.