Another day,  another trip. This time to Schwäbisch Hall in Baden-Württemberg. We left at around 9am with a full charge and a range of about 215Km. We drove along the A8 direction Stuttgart keeping up with the flow of the traffic. Usually I like to go at about 110Km on the mot

orway, its a good compromise between speed and fuel saving. Having said that, this stretch of motorway is very fast, and has a lot of slow moving lorries, the result is that there is a tendency to go faster and faster. I can say the Ioniq electric can move at 180Kmh, but the power soon gets drained. So we pulled off at Ulm and went to IKEA to get a free charge and something to eat. We arrived at about 10;:30 and spent about a 75 minutes charging. The Ikea charger was 20Kh so in the time there we went from 18% to 65% charge. Next we went to Wiesensteig which has beautiful wood framed houses, stopping on route at a fast charger at A8 Nellingen, I have stopped here before and had nothing but problems with the charger. 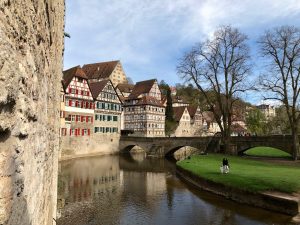 Today was no different. I started the charge session with the eCharge app, and of course charging didnt start. Tried again and again the charger reported and error said charging had stopped, but in fact it did charge for 9 minutes, and then stopped. I appear to have been charge for only one session, but its so hard to tell with the terrible echarge app. Anyway we had a few more kWh of power soon to Goppingen to a charger that is in the Ioniq Navigation. It turns out this charger is in the park place for the upper management of a company and the parking place is marked as Reserved for CEO (or similar). Strangely, the charger isn’t on any of the standard charger maps, such as Going Electric, plug share, new motion etc, so I wonder if it is actually a private charger. As there were no signs to the contrary, we plugged in and had another free charge. I have not seen this type of charger before in Germany, but have
seen videos of one in the Vlog of TeslaBjorn.

The next stop was in park house P6 in Schwäbisch Hall. This is a type 2 charger, and again, free, and for 2 hours the parking cost €3. The town is well worth a visit with its old buildings. In some ways it reminded me of Sarlat in France. On returning to the Ioniq we had an indicated range of 224Km and the distance to home was 198Km. We tool the non motorway route over Nordlingen, at speeds approaching the limit on the area we were in, so between 70Kmh and 100Kmh outside towns and 50Kmh in towns. We covered in total 204Km to home without recharging on route and still had 9% battery left.

The total distance covered was 470Km and the total cost of fuel was probably €7. I say probably as I don’t know the price of the motorway charge yet and the eCharge app doesn’t show the cost.