Over the last few weeks the temperature has finally started to rise, and we are now in the mid teens to low 20 deg C. I think its safe to say winder has finally gone, if not forgotten, at least on the low grounds. So last week I gave Autohaus Sangl a call to book an appointment for my tyre change. Usually I have summer and winter complete tyre sets, but as I had the winter tyres put on the standard rims, I have this time had the summer tyres put back onto the original rims. Sometime during the next few months I will purchase rims for winter. Currently I don’t know which rims I will get but I am leaning towards an original Ioniq set. It took about 90 minutes for the 4 tyres to be refitted and balanced. The cost was just over €120 including storage of my tyres. This is in line with what I was expecting. As an aside, when I called to book the appointment, for some strange reason I was told it would be €20. I asked if that was per tyre, but was told, it was the total price. It was obvious to me this price could not possible be correct. Anyhow, my car was also washed, which was a nice surprise. 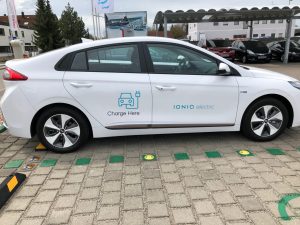 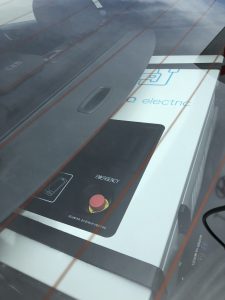 Whilst I was there I took a short recharge. I didn’t need it but I had 10 minutes to kill waiting for my appointment. Our old car that we traded in was still there, waiting for a new owner. Next to me however were 2 white Ioniqs which had a vehicle to vehicle  (V2V) system built in. The idea is that one of these Ioniqs could goto a stranded EV and recharge it enough to get to a charge point. If I understood correctly, these cars are for the ADAC.

I also discovered that I need to get my charge port exchanged on the Ioniq. Currently the parts are out of stock, and have a longer delivery time, so Sangl is going to order the required items and contact me later to arrange an appointment to install them.