Regensburg and the Hundertwasser Turm

Time for another day trip. This time a quick trip to Regensburg. We charged for free at the Autobahn station Pentling. Its only 20Kw but free is free. After watching an airport shuttle park in 2 of the 4 available EV charging parking places (there is only 1 charger at present) and just sie there for no reason, we continued into Regensburg itself. I had read in advance that charging in Regensburg is difficult at best, due to the local mayors politics, so it didn’t surprise me to see only 2 charging point, a slow one. But at least it wasn’t blocked. Due to the local policy of not towing away cars blocking chargers, and instead issuing only a parking ticket for 15€, its cheaper to pay the fine than to park all day in a garage. So those chargers there are are often blocked.

Following a walk around the city we decided to start the trip home. We had often seen the sign on the Autobahn for the Hundertwasser Turm at

Abensberg but we had never stopped there. The town is a bit off route, but we went anyway. There is one charging point next to the 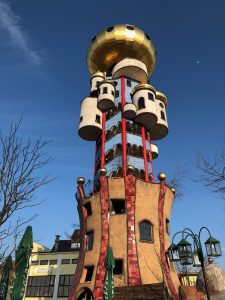 “Altes E-Werk” which has two type 2 connectors and standard power sockets. Again, this charge point is free and delivers up to 22Kw. As we plugged in, another Ioniq pulled up with stickers from Autohaus Sanlg, the dealer where we purchased out car, but the driver said the car had nothing to do with Sangl, he was just giving free advertising for him.

In Abensberg itself we were just in time to be too late for a fete. The town is attractive in the center. Small however. The Hundertwasser Turm is a part of the local brewery. It it possible to tour the inside, but it was a bit too late. The cost of a tour is €18 per adult.

On returning to our car a good 90 mins later, we drove across country back to the Autobahn, and passed filed after field of what looked like brand new cars all in storage. There must have been a few tens of thousands of vehicles  of all makes, mostly SUV. I have no idea why they are there, but as a distribution central in fields? Seams unlikely.