Chantal was registered for the Vienna Marathon in 2017, but due to a fractured kneecap, she was unable to take part. We still went to Vienna as Chantal had wanted to go for a long time, but due to her injury, and the terrible weather, we didn’t really see very much.

In February 2018, Apple opened an new store, the first in Austria. As I like to visit new Apple stores, I suggested to Chantal that we went to Vienna for the weekend. She immediately said yes. So about 7am we jumped in the fully charged preheated Ioniq and set off for the circa 500Km drive to a hotel right in the middle of the city. In comparison to the trip to Brno, I decided not to go to Austria via Rosenheim but towards Passau and cross into Austria near Branau am Inn. I find this route is more relaxed compared to the rather overcrowded and fast A8. As a side effect, its also a bit shorter route.

The weather was cold. Very cold at about -5c or colder. Our first charging stop was at Frixing, and the second at Branau am Inn where there is a charge in a shopping center carpark. Last time we were here, it was late at night and the carpark was closed. The position of the charge point is right at the edge of the parking and it would be possible to park on the pavement to charge, but we just opened the barrier and went into the car park, making sure we closed it again when we left. On this occasion the charger was occupied by an e-golf that was plugged into the charger, but not charging. It looked as if the charing had just finished as the point’s display said something like charging finished. I plugged our car in to charge and waited by the car. The e-golf owner came back a few minutes later and I told him we had moved over the connector as he had finished. He was quiet happy about it. As far as I am concerned if the charging has finished, there is no problem with moving the cable. Some people, however, don’t think its ok.

We drove a little bit off the Autobahn for a while before rejoining it and eventually charged at Wels. Further along the Autobahn we charged at Loosdorf, and then St Pölten (Lidl). The hotel in the center of Vienna we reached at about 15:00. When I booked the hotel, I specifically chose one that said it had a charging point. In reality however, it didn’t even have a garage. Instead, they directed us to a public parking at Franz Josef Kai, which has Wien Energy charge points. My New Motion, Plugsurfing and other cards didn’t work with Wien Energy. The hotel also had no card for Wien Energy.

When I was considering going to Vienna, I had looked at the charging systems and noticed that most of the points appeared to be from Wien Energy, so after a few messages from others about a special price that was being offered, I applied on line for an RFID card. A few days later the card was in my mailbox. Great, but … I then had to send in a written contract, wait for the reply, then they sent another letter saying the card would be activated a week later. All in all it took nearly 3 weeks to get the card and activate it. In the mean time I had been to and returned from Vienna. So the whole 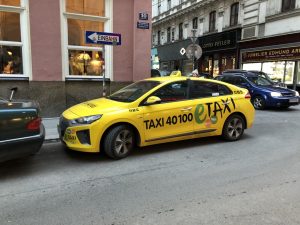 application was a waste of time. However, I had the card in my wallet, and in the Franz Josef Kai car park, even thought the Wien Energy card was not “activated”, it did start the charger. I don’t know when or if I will receive a bill for this single charge, but so far I have heard nothing.

In Vienna we spotted an Ioniq Taxi. I have seen many Electric Taxis over the last few years, mostly Tesla, and Leaf taxis but this was the first Ioniq Taxi I have seen.

The return trip on Sunday was uneventful and we used chargers at Altlengbach, St Pölten (where instead of Lidl we charged at the “Landhaus vor Haus 17” which is rather slow at only 20Kw, but free), St Valentine, St. Martin im Inn Kreis and Frixing. I have come to the conclusion that driving longer distances at night or on Sundays can be an issue as a lot of rapid chargers at shops and centres are closed.