When your using a new technology for the first time, there are two strategies. Open the box with a devil may care attitude and push it to its limits or peek inside the box and take baby steps whilst getting use to it. I tend to the latter.

We collected our Ioniq, which we named “Heart ofGold” after the spaceship in “The Hitchhikers Guide to the Galaxy” due to the synthesised engine sound at low speed, at the very end of November.

Our first few trips were quite short, maybe 200km or so each time, with plenty of charging stops. I remember a youtube vlogger saying “with an EV remember ABC – Always Be Charged”. The first few weeks I really took this to heart, charging every time I saw a charger (almost). WE ventured as far as Innsbruck in Austria. Really no distance at all but it felt like a big adventure. Would we find a charger? Would our RFID cards work? How much will roaming cost? and so on. 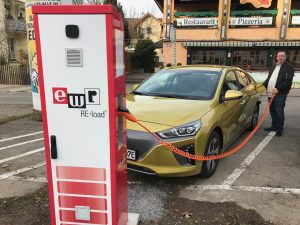 Needless to say all our fears were unfounded. Up to today we have never been unable to find a charge. We have come close to it on 2 occasions, once during the test drive and once during a very very cold trip in an area with few chargers. On that occasion we had about 15Km left and the intercharge charger we stopped at wouldn’t work Calling the support number was like hitting my head against a brick wall. So unhelpful, but they did happily take my money for a charge session that never worked. With next to no power, in -10C and little hope I was about to call Hyundai Assistance when I saw in another app, that there was another charge point 10Km away on the autobahn in the direction we were going. I took those 10KM very carefully and much to my surprise made it with power to spare. Would this charger start ? This was the only time I really had range anxiety. The charge started and completed without problem.

The return journey also turned out to be “interesting” as it snowed heavily whilst we were at a friends house, and most of the autobahn was reduced to 30-50Km/h. Our range was down to about 130Km per charge due to the snow and cold temperature. 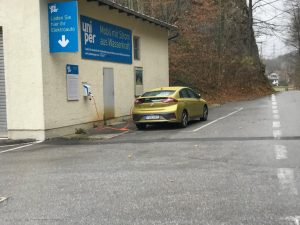 One of the chargers we needed to use was blocked by a coach but I managed to squeeze around him to the charge point probably blocking him, but hey he shouldn’t have parked in a clearly marked EV only parking place. One other charger I was about to pull into the charger and there was another car that reversed into the EV charging place. I leant out of the window and pointed to the charger and told the driver I needed that space for the charger, and she apologised and moved her car over to another spot.

As my confidence in the range improved so did the distance we covered on our days out.